I deliver knowyourself.me storytelling and community philosophy sessions on a self-employed basis and coordinate activities from a wee office at home. I have made my home environment as sustainable as possible given that it is privately rented. All my storytelling resources are in my head so travel is easy. I travel by train, bike or foot when possible. Most stories I tell were passed to me by oral tradition. I almost always source anthologies of stories second hand, mostly from charity shops. There is no physical by-product of storytelling so there are no waste issues. 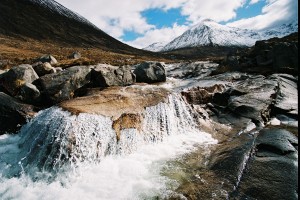 The knowyourself.me sessions are inherently sustainable. Traditionally storytelling occurred in the “ceilidh house” where the community would gather together to hear a teller of tales. This meant that only one hearth would burn fuel rather than many burning in individual houses. This continues with knowyourself.me as participants gather together, reducing their need for resources at home. One modern implication relates to our reliance on information technology. Although most electrical items use a small amount of energy to power them we are starting to realise that the on-line nature of most of our technological activity requires significant amounts of energy to power the internet servers. This is one of the fastest growing areas of energy / resource consumption globally (10% per year). Therefore, by engaging people in the traditional, low/zero impact, activity of storytelling we are allowing them to reduce their environmental impact.

Early in a knowyourself session participants are asked to venture outside and collect a handful of windfall twigs and branches to fuel a metaphorical fire. This allows people a chance to find Nature within the urban environment. It also encourages a good storytelling space. Knowyourself.me is one of the few artistic ventures that overtly engages with ecology on a deeper level. During a knowyourself session we share stories that allow participants to consider their sense of “self” on many levels – Anthropologically on the ego, family, societal levels and Natural on the domestic, wild and supernatural levels. The supernatural level is accessed by sharing stories of prophecy and precognition known in Highland tales as “the second sight”. The knowyourself facilitator’s experiences with his “ecological self” have involved precognitive experiences. This leads him to conclude that such experiences are a “channel” or “pathway” to ecological self-realisation, a feeling of true connectivity with all nature and a resultant desire to protect it.

The knowyoruself.me concept was initiated as a result of my participation on the Natural Change Project in Knoydart. This course was funded by the WWF who were interested to see if direct experiences of deeper ecology would lead people to more sustainable behaviour. In addition, the pioneering ecologist John Muir makes recognised precognitive experience as a part of nature.

“As to what is usually called supernatural, very little of it has come my way – just enough to convince me that there may be forces which produce phenomena, now called supernatural, that are as natural as any of the other forces with which we are more or less acquainted.” The John Muir Papers -series III C – unpublished